First UNIX system was developed in 1969 and ran on systems from microprocessors to mainframes and provided a common execution environment across them. The system was divided into two parts :

The early version of UNIX was developed after the end of development of Multics OS. In an attempt to improve their programming environment, Ken Thompson, Dennis Ritchie, and others sketched a paper design of a file system that later evolved into an early version of the UNIX file system. In 1973, the UNIX was rewritten in C.  1977 marked the year that the UNIX system was first “ported” to a non-PDP machine (that is, made to run on another machine with few or no changes), the Interdata 8/32. In the period from 1977 to 1982, Bel1 Laboratories combined several AT&T variants into a single system, known commercially as UNIX System III. Bell Laboratories later added several features to UNIX System III, calling the new product UNIX System V. However, people at the University of California at Berkeley had developed a variant to the UNIX system, providing some new, interesting features.

By the beginning of 1984, there were about 100,000 UNIX system installations
in the world. Reasons for the popularity and success of the UNIX system :

Although the operating system and many of the command programs are written in C, UNIX systems support other languages, including Fortran, Basic, Pascal, Ada, Cobol, Lisp, and Prolog. The UNIX system can support any language that had a compiler or interpreter and a system interface that maps user requests for operating system services to the standard set of requests used on UNIX systems. 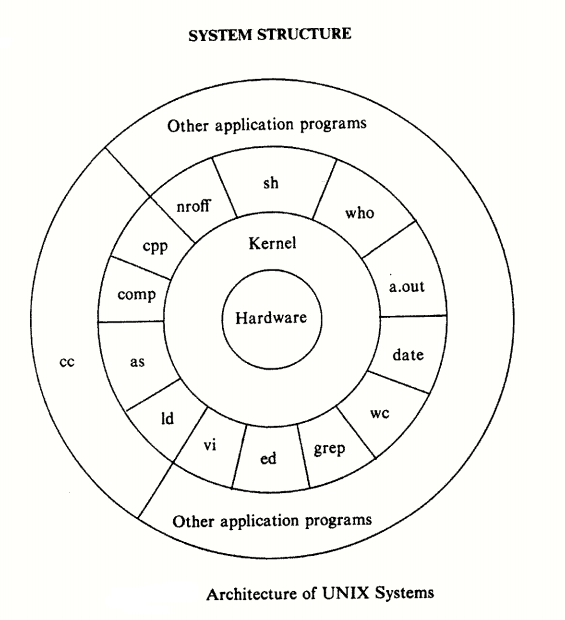 Viewing the system as a set of layers, the operating system is commonly called the system kernel, or just the kernel, emphasizing its isolation from user programs. Programs such as the shell and editors (ed and vi) shown in the outer layers interact with the kernel by invoking a well defined set of system calls. The system calls instruct the kernel to do various operations for the calling program and exchange data between the kernel and the program. Several programs shown in the figure are in standard system configurations and are known as commands, but private user programs may also exist in this layer as indicated by the program whose name is a.out, the standard name for executable files produced by the C compiler.  Although the figure depicts a two-level hierarchy of application programs, users can extend the hierarchy to whatever levels are appropriate. Indeed, the style of programming favored by the UNIX system encourages combination of existing programs to accomplish a task.

Many application subsystems and programs that provide a high-level view of system such as the shell, editors, SCCS (Source Code Control System), use lower-level services ultimately provided by the kernel, and they avail themselves of these services via the set of system calls.

Scroll back to top